Ashfield is a great place to live, work and visit, and has some attractive parks and neighbourhoods. Even Cleaner Streets is a campaign to improve the appearance of the district by delivering a programme of activity that both promotes good environmental behaviours and tackles negative ones. 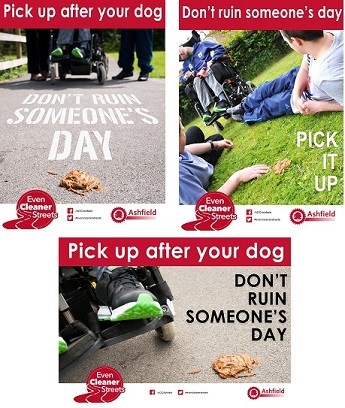 Even Cleaner Streets will use a range of campaigns, techniques and enforcement activity to address issues that cause a blight on the district whilst working with communities to support and encourage local ownership of the environment.

Having piloted Keep Britain Tidy's We're Watching You campaign in areas across the district, and seeing a reduction in dog fouling  in those pilot areas, the campaign has been expanded with the roll out of new hard hitting images that have been created using suggestions from Ashfield residents on social media.

Students at Portland Training College wanted to get involved with the dog fouling campaign after giving the Council information on how dog fouling impacts wheelchair users. They supported the Even Cleaner Streets Campaign by creating their own posters and installing them in areas where they have been affected by dog fouling. 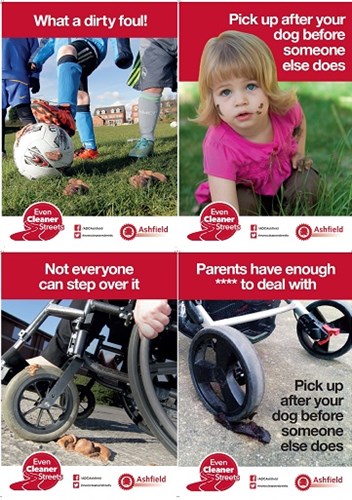 Teaming up again with Keep Britain Tidy, a campaign was launched to address the issue of littering on the move. Litter from vehicles can be seen across the country in lay-bys and on road sides and Ashfield is no exception. Each year the Council has to close lanes on the main arterial routes to collect the litter that has been discarded from vehicles, often this is made up of fast food litter. The Lazy Disgusting Slob campaign was designed to highlight this issue.

Why not get involved, you can suggest a campaign, identify areas for posters to be installed or suggest questions for the survey bins by: